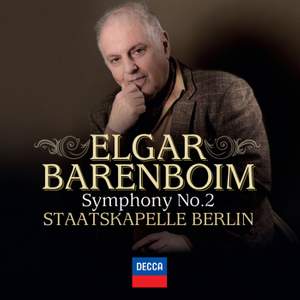 This is a superb, in fact I feel justified in calling it a great, Elgar Two. It's difficult to know where to start in listings its excellences...But one must start and finish with Barenboim's... — BBC Music Magazine, June 2014, 5 out of 5 stars More…

Following his critically-acclaimed Elgar Cello Concerto recording with Alisa Weilerstein, Barenboim turns to the symphonies. The Second Symphony is released first, in a 2013 recording with the Staatskapelle Berlin. The First Symphony will follow in 2015.

“To hear an orchestra with such a distinctive central European sound playing Elgar, and relating his music so securely to the wider late-romantic tradition, is one of the disc’s great pleasures.” Andrew Clements, The Guardian (of the Cello Concerto recording)

This is a superb, in fact I feel justified in calling it a great, Elgar Two. It's difficult to know where to start in listings its excellences...But one must start and finish with Barenboim's interpretation...this is a marvellously full-blooded reading of the Symphony, full of drama and passion...This must be one of the finest performances currently on offer.

The gorgeous, silken string playing is something exceptional for Elgarians, but there is also plenty of Edwardian swagger in the brilliant rondo and majestic finale. A glorious disc

The surging, unquenchable energy of this account is obvious from the opening bars, which are borne on an irresistible flood of sound from the Berlin Staatskapelle...Every department of this fabulous orchestra seems to make a telling contribution to this performance at some point or other, and it's as much a triumph for the Staatskapelle as it is for its conductor

Barenboim and the musicians plunge into the Second’s ardours and wistful ways as if to the manner born. We quickly realise we’re not listening to a British orchestra: the timbre of the horns alone transports us far from Elgar’s Malvern hills. Yet the central European sounds only help to link the symphony with the European traditions that nurtured Elgar’s art.