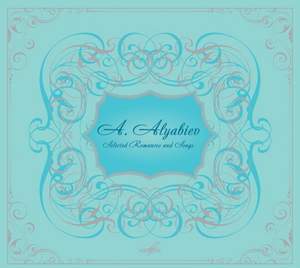 Alyabyev: I See Your Image

Alyabyev: What are you singing, beautiful damsel?

Alyabyev: Will I step on the Porch?

Alyabyev: The Mountain Maid is Weeping

Alyabyev: We have many maids in the mountains

Alyabyev: Ah, there are many paths in the Field

Alyabyev: There's a settlement across the River

Firma Melodiya presents a collection of selected romances and songs by Alexander Alyabiev. So well-known to the wide audience as an author of 'The Nightingale', Alexander Anatolievich Alyabiev was a man who lived a very bright, eventful and at the same time hard life. He also was a brave officer who fought in the Patriotic War of 1812, an outstanding composer and founder of Russian lyrical romance that anticipated many of the discoveries in Russian music of the 19th century, and a disgraced exile who spent the years of his creative prime in Siberia.

Alyabiev composed music in different genres, but his highest creative achievements were connected with romances. He was one of the first composers to create original, distinctive romances on the texts by Pushkin. Alyabiev was also on friendly terms with many of the poets and playwrights of the day, and created bright dramatic songs full of conflict and protest.

The works featured in this collection reflect the diversity of Alyabiev’s vocal lyricism. Along with popular romances such as Beggar Woman, I See Your Face, The Hut, Village Watchman and I Loved You, the collection comprises several less known ones, including arrangements of Russian, Ukrainian and Georgian folk songs – another side of Alyabiev’s musical talent.

The recordings of Alyabiev’s romances and songs were made in 1978 to 1990 by leading concert singers and soloists of the Moscow music theatres - Evgeniya Shevelyova, Nina Fomina, Nina Isakova and others.