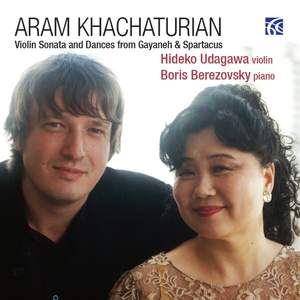 Khachaturian: Sonata for Violin and Piano

HIDEKO UDAGAWA has performed extensively throughout the world and captivates international audiences with her artistry and enthusiasm. Critics have acclaimed her performances, commending her passionate commitment, dazzling agility and refinement of taste. As a protégée of Nathan Milstein, she has inherited the great Russian romantic tradition of violin playing. Her performances have spanned thirty countries across Europe, North America and Asia-Pacific, and more than one hundred cities and towns in the United Kingdom alone. As the greatgranddaughter of one of Japan's historically most influential prime ministers, she enjoys the international performer's role as a cultural ambassador.

BORIS BEREZOVSKY has established a great reputation, both as the most powerful of virtuoso pianists and as a musician gifted with a unique insight and a great sensitivity. Born in Moscow, Boris Berezovsky studied at the Moscow Conservatory with Eliso Virsaladze and privately with Alexander Satz. Subsequent to his London début at the Wigmore Hall in 1988, The Times described him as "an artist of exceptional promise, a player of dazzling virtuosity and formidable power". Two years later he won the Gold Medal at the 1990 International Tchaïkovsky Competition in Moscow.

this disc provides an excellent example of ensemble playing as well as showcasing Udagawa’s flair for Khachaturian.