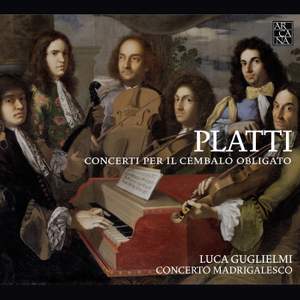 Platti: Concerto a cembalo obligato No. 2 in Do Minore, I 49

Platti: Sonata oboe solo in Do Minore, I 100

Platti: Concerto a cembalo obligato No. 7 in Sol Maggiore, I 55

Platti: Concerto per il cembalo obligato No. 6 in La Maggiore, I 57

Twelve years younger than Bach and Handel, Giovanni Benedetto Platti left us a collection of nine Concerti per il cembalo obligato which rank not only among the very early examples of composition for keyboard instrument and strings, but also and above all, the first specimens especially conceived for the fortepiano, the new instrument invented by Bartolomeo Cristofori.

Billiant soloist and regular keyboard player of Zefiro, Luca Guglielmi offers us, for the first time on period instruments three brilliant and foreseeing piano concertos, interspersed with the large scale Piano Sonata in C minor, a very widespread composition at the time, and the baroque Sonata for oboe, with a special appearence by Paolo Grazzi.

An ashtonishing piece of music from a composer who deserves to be recognized as one of the greatest of his time.