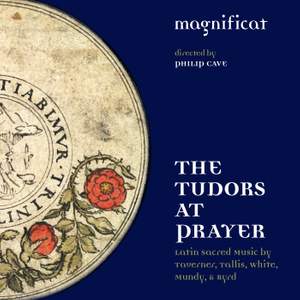 Offer, The Tudors At Prayer: Magnificat

The Tudors At Prayer’ provides further evidence of the extraordinary richness of this centuries old repertoire.

Magnificat is one of the world’s premier vocal ensembles whose recordings have met with huge critical acclaim: Spem in alium was hailed as ‘quite the best performance of Tallis's 40-part Spem in alium that I have heard' by Gramophone and was ‘First Choice’ in Building A Library on BBC Radio 3's CD Review. In addition Victoria’s Officium Defunctorum was named ‘Critics’ Choice’ by Gramophone and chosen by The Rough Guide as one of its ‘100 Essential Classical CDs’.

In association with Linn Records, Magnificat has undertaken many highly successful recording projects of music from ‘The Golden Age’, including works by Gesualdo, Guerrero, des Prez, Rebelo, Victoria, Allegri, Tallis and Da Palestrina, as well as Latin sacred music by Robert Parsons, Robert White and William Byrd and two recordings to commemorate the 450th anniversary of composer Philippe Rogier.

The singers of Magnificat are acutely responsive to [Mundy's] architecture.