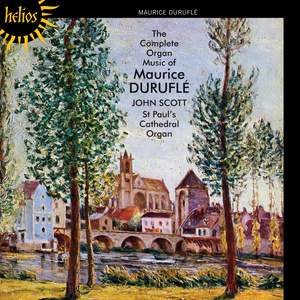 with the Gentlemen of St Paul's Cathedral Choir

Consummate phrasing, perfectly judged crescendos and bags of atmosphere. His playing is magisterial in its sheer elegance, discriminating taste, and devotion to the music — BBC Music Magazine More…

Erstwhile organist of St Paul’s Cathedral, John Scott, puts the cathedral’s wonderful instrument to the best possible use in this album of Maurice Duruflé’s complete works for organ.

Duruflé studied with the greatest organists of the age, Charles Tournemire and Louis Vierne, and there is no doubt that his exposure to the genius of both in their respective organ lofts had a formative influence. Duruflé’s compositional reputation is assured through one work: his beloved Requiem of 1947. In his organ music we hear his fascination with Gregorian plainchant themes which is such a feature of that work.

Consummate phrasing, perfectly judged crescendos and bags of atmosphere. His playing is magisterial in its sheer elegance, discriminating taste, and devotion to the music

Recordings and performances are splendid. Scott’s playing is technically immaculate and his interpretations are intense and moving