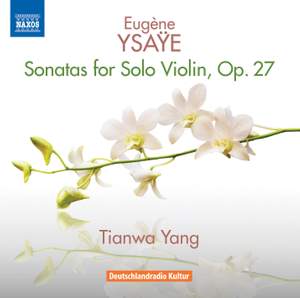 Eugène Ysaÿe was a towering figure in the history of the violin. He also composed a number of important works, most inspirationally the cycle of Six Sonatas for Solo Violin, which rank among the greatest and most demanding of the twentieth century. Each is dedicated to a fellow violinist and friend, whose style of performance and musical preoccupations they reflect. Echoes of Bach are present, as are dance motifs, and virtuoso figuration, reflecting the eminence of the dedicatees.

Yang negotiates the musical and technical chicanery of Ysaye's six solo Sonatas with great aplomb...Wang's rare ability to sustain a convincing emotional narrative in these elusive scores proves highly compelling...she moulds even the most challenging of phrases with a dedicated sensitivity and affectionate warmth.

a display of remarkable playing. As is absolutely necessary with these pieces, the tuning is perfect, and it is a mature, assertive and compelling performance that honours these sonatas as much more than the study pieces they are often labelled.