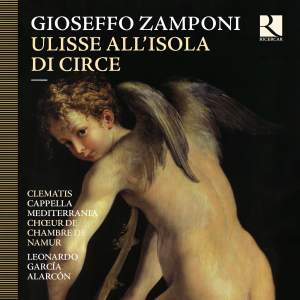 Ulisse all’isola di Circe was the first opera to be staged in the Southern Netherlands. It was first performed in Brussels on the occasion of Philip IV of Spain’s wedding to Maria-Anna of Austria on 24 February 1650, although we know that the spectacle was revived in 1655 at the express wish of Queen Christina of Sweden.

Gioseffo Zamponi was most likely born in Rome between 1610 and 1620. He made his career in the Southern Netherlands, entering the service of Archduke Leopold-Wilhelm, governor of the Netherlands, in 1648, for whose establishment he composed sacred music and also played.

Ulisse was composed in the new Venetian style and made use of clearly defined character types. The opera not only blends the recitar cantando style with arias but also alternates theatricality with episodes charged with emotion. The splendour of such a rediscovery fired every musician who took part in the work’s resurrection with enthusiasm.

Such a large-scale project as this required the participation of all three ensembles that are regularly led by Leonardo Garcia Alarcón. The Clematis ensemble had first presented the first modern performance of the opera in 2006 as part of the Printemps Baroque du Sablon in Brussels. For this new realisation of the opera, Clematis committed themselves totally to presenting the work with all the splendour that it would have had when it was first performed in Brussels in 1650.

As is always the case with productions mounted for royal weddings, the means employed were impressive: Clematis was expanded to thirty musicians for the occasion - as well as the strings and a large continuo group, the ensemble was also joined by several wind instruments that provided extra orchestral colour and gave each character his own musical identity, given that a number of orchestral ritornelli are provided for each scene.

Led by Leonardo Garcia Alarcón, the singers of the Capella Mediterranea form a perfect cast of soloists for the opera. The solo voices of the Choeur de Chambre de Namur take the remaining roles of Circe’s handmaidens, the chorus of Tritons, the chorus of statues etc.

A CD that simply must be heard!

Alarcón liberally sprinkles cornetti, recorders, bassoons and trombones - and employs a kaleidoscopic continuo team - in order to recolour numerous passages in the score...Furio Zanasi's Ulysses has the requisite weariness with hints of cunning intelligence.