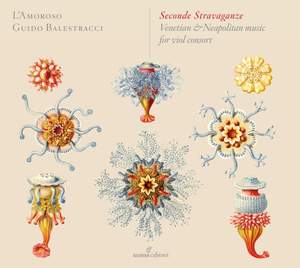 Guido Balestracci’s passion for extending the repertoire of the viol consort, especially with Italian music, took flight with this 1999 recording of Seconde Stravaganze (made originally for Symphonia) and now available on Glossa Cabinet.

Happy to push boundaries in an “extravagant” but well thought-through way Balestracci – with his ensemble L’Amoroso of gambas, harp, keyboard instruments and percussion – conjured up an entertainment of Venetian and Neapolitan music for viol consort. Whether these 16th and 17th century pieces (Gesualdo, Trabaci, Del Buono, Montalbano, Legrenzi, Storace et al) were originally scored for voices, organ, harpsichord or viols, Balestracci and his musicians create transformations which remain true to the first composers’ intentions, and which sound as fresh today as when they were first recorded.