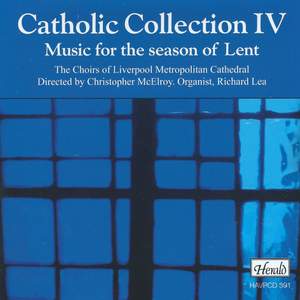 Offer, Music for the Season of Lent

Pergolesi: God of Mercy and Compassion

Tallis: Lamentations of Jeremiah I

Ireland: Ex ore innocentium (It is a Thing Most Wonderful)

Ireland: My song is love unknown

Holy week is an important time in the liturgical year, when we commemorate the passion, death and resurrection of Jesus Christ. These moving events have inspired many composers to set texts appropriate to these liturgies. Most centrally stands the triduum, and the liturgies of the Last Supper, Passion and Resurrection. Holy Thursday, or as it is known in England, Maundy Thursday, focuses on the Last Supper,and the love that Christ showed to his disciples. The offertory text set for the Mass is ‘Ubi caritas,’ which appears on this CD in a setting by the American composer Morten Laurisden. The traditional chant is sung at the opening, before Laurisden develops the melody and harmony in his own imitable way. The centralityof the Eucharist and the sacred banquet is expressed through the text of O sacrum convivum, one of several compositions by Thomas Tallis sung on this disk. Published in his 1575 Cantiones Sacrae, ‘O sacrum’

started life as an instrumental work, subsequently adapted to various texts, of which this example is the best known. The liturgy of Holy Thursday concludes with the traditional procession of the Blessed Sacrament to the Altar of Repose, during which the hymn Pange lingua by St Thomas Aquinas is sung. The final two verses of this hymn, ‘Tantum ergo’, are sung on this disc in a setting by the Dutch organist and composerHendrik Andriessen, set for treble voices and organ.