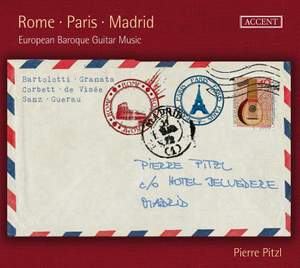 After the guitar had just recently been more or less "invented" in Spain (for this reason it was called guitarra espanola or chitarra spagnuola), it did not take long for it to start its trium-phal march through all of Europe in the mid-17th century. The guitarist Pierre Pitzl presents this development on his first solo CD for Accent in exemplary fashion, using the examples of three musical centres and composers active there: Granata and Bartolotti in Rome, De Visée and Corbetta in Paris as well as Sanz and Gerau in Madrid. The image resulting from this is a highly variegated one: only a strummed instrument in the beginning, the guitar soon devel-oped a highly differentiated technique consisting of both strumming and plucking. In this way, a new style of composition and sound was created hand in hand with a previously un-heard-of, bold treatment of dissonances.

The attraction of this CD is found precisely in this variety and high technical standard. Pierre Pitzl satisfies these demands with impressive bravura, for he is a master - more so than hardly any of his peers - of the "mixed style" with its subtle alternation between strumming and plucking.