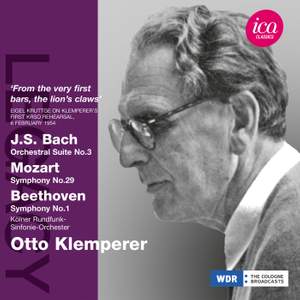 The music benefits from that all-important sense of live engagement...the only reason I was reminded that these are 'old' recordings was through the quality of the performances: love then or... — Gramophone Magazine, August 2014 More…

Otto Klemperer (1885–1973) was one of the most celebrated German conductors of the 20th century, along with such eminent names as Bruno Walter, Erich Kleiber and Wilhelm Furtwängler. After leaving Germany in 1933 for the USA, he returned to Europe in 1946 and became music director of the Budapest Opera (1947–54). But it was not until he came to Cologne in 1954 that Klemperer started his ascendency to the pinnacle of his career which concluded with his great years as music director of the Philharmonia Orchestra together with a large and distinguished discography.

These WDR broadcasts have never been issued before.

Klemperer’s debut with the KRSO took place on 8 February 1954 with Mozart’s Symphony No.29, a favourite of the conductor. Eigel Kruttge, a Cologne Radio producer who had been Klemperer’s assistant at the Cologne Opera in the 1920s, famously wrote in his diary on hearing Klemperer’s initial rehearsal ‘From the first bars, the lion’s claws’ – an apt description for this tall and imposing conductor.

Following the success of Klemperer’s first concert, he was invited back in the same month to conduct Beethoven’s Symphony No.1. On hearing the performance, Kruttge wrote ‘Everything absolutely right’ in his diary.

The broadcast of the Bach Suite No.3, another favourite work of the conductor, followed in October 1955, almost a year after he recorded Bach’s four Orchestral Suites with the Philharmonia. WDR’s broadcasts of all these concerts are of very high technical quality.

The music benefits from that all-important sense of live engagement...the only reason I was reminded that these are 'old' recordings was through the quality of the performances: love then or leave them, you'd travel far and wide to hear anything similar nowadays.

The Beethoven symphony shows more than a glimpse of what made him so celebrated [in Cologne]: the strong grasp of the music’s architecture, the fierce clarity, the prominence of the wind. Mozart 29 has greater dash and delicacy than was typical of his later Mozart performances.