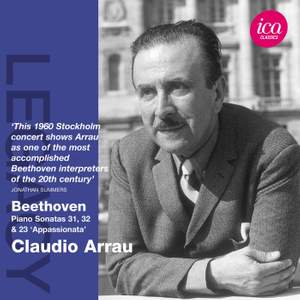 The celebrated Chilean pianist Claudio Arrau’s (1903–1991) career spanned the evolution of recorded sound, from his first acoustic recording in 1921 to the digital era of the 1980s. He was a pianist equally at home in Beethoven, Liszt and Schumann, composers who formed the centre of his repertoire in later years.

By the mid-1930s, Arrau was giving marathon recitals of the complete keyboard works of Bach and Mozart. In 1938, he performed for the first time the complete sonatas and concertos by Beethoven. He recorded a vast discography for EMI and Philips which included selected Beethoven sonatas for EMI in the 1950s and the complete sonatas for Philips between 1962 and 1966. ‘Arrau was a deeply thoughtful musician who tried to get to the heart of the work he was performing with an interpretation illuminated by his wide knowledge of art and literature’ (Jonathan Summers).

This recording is extremely rare and has never been issued before.

It is considered in some circles that Arrau’s live performances of the Beethoven sonatas are superior to the studio versions. Joseph Horowitz has stated ‘I do not find his (studio recorded) cycle conveys Arrau’s full stature as a Beethoven player’. In the later sonatas, Arrau himself alluded to the fact that an improvisatory approach was required which was difficult to achieve within the constraints of a recording studio.

Of op.111, Jonathan Summers says in his booklet note that ‘as we near the close of the performance we realise that we have been transported to another world by Arrau – the result of great music interpreted by a great musician’. Of op.57, the ‘Appassionata’, Summers states that Arrau ‘plays the work not as a virtuoso display piece but as a conflict between life and death’.

These three sonatas were recorded live in Stockholm with exceptional warmth and clarity in 1960, when Arrau was at the peak of his career. They show that ‘he was one of the most accomplished Beethoven interpreters of the 20th century’ (Jonathan Summers).