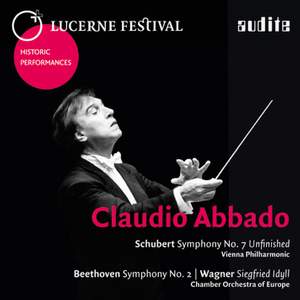 I loved this performance of the Unfinished...The beautifully paced Siegfried Idyll is another gem...the closing pages in particular are superbly done...Definitely worthwhile for the Schubert... — Gramophone Magazine, June 2014 More…

In memory of Claudio Abbado, who died on 20th January 2014 and who was closely associated with Lucerne Festival for nearly 50 years, Audite and Lucerne Festival present three previously unreleased live recordings, approved by the conductor himself. On 5 September 1978, Abbado and the Vienna Phil performed Schubert’s 'Unfinished' in Lucerne: a moving interpretation, emphasising the lyrical character of the work. This piece closes a circle insofar as Abbado also conducted the 'Unfinished' at his final concert, on 26 August 2013 in Lucerne. On 25 August 1988, the festival’s 50th anniversary, Abbado and the Chamber Orchestra of Europe performed exactly the same programme with which Arturo Toscanini had opened the Luzerner Festspiele in 1938, including Beethoven’s Second Symphony and 'Siegfried Idyll', the latter written in Lucerne. The Neue Zürcher Zeitung commented enthusiastically that “the sonic subtleties of the Siegfried Idyll were masterfully executed and carried through to a poignant ending...in Abbado’s interpretation of Beethoven’s Second Symphony the structural clarity of the individual movements was combined with an unabated, almost newly inspired joy of performing amongst the orchestra”. A particularly attractive aspect of this compilation is the fact that Abbado made studio recordings of the Beethoven and Schubert symphonies with the opposite orchestras, i.e. Schubert with the COE (1987) and Beethoven’ with the VPO (1988). The extensive booklet contains a portrait of Claudio Abbado by Peter Hagmann, tracing the conductor’s long-standing activities in Lucerne; also included are previously unpublished photos from the archives of Lucerne Festival.

Claudio Abbado stamped his mark on Lucerne Festival as no other conductor. He made his début in 1966 together with the violinist Zino Francescatti and the Swiss Festival Orchestra. The Neue Zürcher Zeitung witnessed a “delightfully unspoiled maestro with an uncorrupted musical spirit” and made the accurate prediction that “this will not have been the last time that Claudio Abbado has conducted in Lucerne”. He was to return countless times, soon on an annual basis, appearing with the Philharmonia and the VPO, the ensembles of La Scala, the LSO and the BPO, and of course with the orchestras that he himself had founded: the European Union Youth Orchestra, the COE, the Gustav Mahler YO and the Mahler CO. In 2003 Claudio Abbado and Michael Haefliger jointly founded the Lucerne Festival Orchestra, an orchestra unique in uniting long-standing artistic colleagues of Abbado’s: soloists, chamber musicians and professors alongside the core performers from the Mahler CO – into an ensemble in a league of its own. Standing on the podium in front of this “Orchestra of Friends”, as he himself called it, Claudio Abbado ended his artistic career on 26 August 2013 in Lucerne, having conducted Franz Schubert’s 'Unfinished' and Anton Bruckner’s Ninth Symphony at his last concert.

I loved this performance of the Unfinished...The beautifully paced Siegfried Idyll is another gem...the closing pages in particular are superbly done...Definitely worthwhile for the Schubert and Wagner; but if your main priority is Abbado's Beethoven Second, stick with one or other of his lighter-textured Berlin versions.

startlingly original … This performance [of Beethoven’s Symphony No. 2 in D] could serve as a paradigm of the symphonic ideal, bequeathed by Haydn and Mozart, to be exalted by Beethoven.