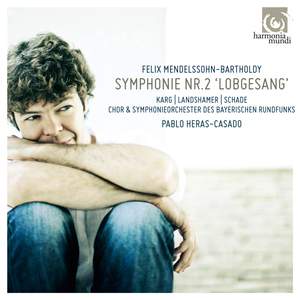 Its quasi-devotional, cross-genre status demands special advocacy, and gets it ...Michael Schade, Christiane Karg and Christina Landshammer are the persuasive soloists, while the chorus radiates... — Financial Times, 31st March 2014, 3 out of 5 stars More…

David picks out some recordings of the German Romantic composer Felix Mendelssohn.

The 'Lobgesang' (or 'Hymn of Praise') was commissioned by the city of Leipzig from its Kapellmeister Mendelssohn to commemorate the 400th anniversary of the invention of printing in 1840, and has elements of the symphony, cantata and oratorio. But, at the opposite pole from Beethoven’s Ninth, we have here a symphonic miniature in three movements, intended to act as the overture to the sung part of the work, which is twice as long. Thus this splendid ‘Symphony-Cantata’ expands into a sweeping vocal and choral epic.

Its quasi-devotional, cross-genre status demands special advocacy, and gets it ...Michael Schade, Christiane Karg and Christina Landshammer are the persuasive soloists, while the chorus radiates belief in its pivotal “armour of light” outburst and subsequent Bach-inspired chorale.

This is an outstanding performance of the Sinfonia by the Symphonieorchester des Bayerischen Rundfunks with considerable forward momentum under the assured direction of Pablo Heras-Casado...This excellent new release is a match for any of the versions in the catalogue.

a triumphant and well-paced performance.