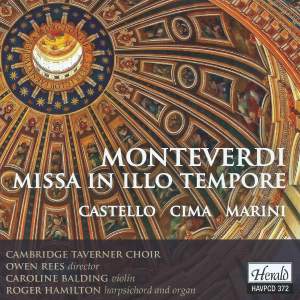 Monteverdi’s source of material for this work was the six-voice motet In illo tempore by Nicolas Gombert, one of the most prestigious of the Northern-European composers who dominated the world of sacred musical composition until the second half of the sixteenth century.

Monteverdi’s skills in the traditional parody techniques are highlighted in the 1610 print by the inclusion of a list of the motives from Gombert’s piece which Monteverdi has exploited and transformed.

The Missa In illo tempore – which presents a fascinating contrast to Monteverdi’s better-known sacred music – is much more than a well-crafted and particularly richly scored example of the ‘da cappella’ manner.

Over more than 25 years, the Cambridge Taverner Choir has built a reputation for powerful and expressive performances of Renaissance polyphony. Under the direction of Owen Rees, the choir seeks to explore the impact and atmosphere that the most expressive music of the Renaissancemust originally have had.