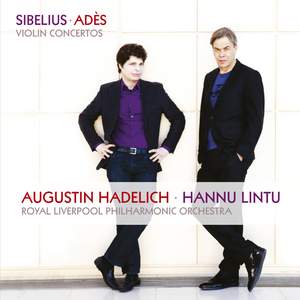 Violinist Augustin Hadelich, one of the fastest-rising stars of his generation, releases his first major concerto recording, pairing the Violin Concertos of Jean Sibelius and Thomas Adès, only the second recording of British composer’s work. He is superbly supported by Hannu Lintu conducting the Royal Liverpool Philharmonic Orchestra.

Hadelich, who has three critically acclaimed and Billboard-charting releases on Avie to his credit, delivers what promises to be one of the most important concerto recordings of 2014. Describing his decision to couple Sibelius with Adès, Augustin says, “Programmes I like most are ones where the pieces are connected, but in a subtle way. As we listen to an apparently contrasting programme, we notice similarities - we hear phrase shapes, harmonies, rhythms, and colours in one piece that remind us of something that we heard in the other. The deep, rumbling timpani and low winds in the Sibelius concerto bridge the gap to the Adès, a work which also explores the lowest depths of the sound spectrum, creating chasms over which the violinist performs a tight-rope act. The intensely emotional first and second movements of the Sibelius, and the even more extreme and heartwrenching second movement of the Adès, create another such connection.”

“Both composers love playing with complex rhythms: Sibelius sticks to polyrhythms, while Adès really pushes the envelope having the solo violin and orchestra play in different meters - or even at different tempi! The dances in the last movement of the Sibelius have a counterpart in the almost tribal-sounding last movement of the Adès. There are many other such comparisons, and, in my view, combining these concertos on one recording makes each one shine in a way that they wouldn’t without the other.” Hadelich rounds out the recording with Three Humoresques by Sibelius.

this is a disc which grows in stature on each hearing.

you can be in no doubt [that the Adès] is a masterpiece, its shape and ecstatic lyricism rooted in tradition but with an irresistible modern edge...Hadelich and the Royal Liverpool Philharmonic are less intense in the outer movements, but their approach pays dividends in the slow movement which, at nearly a minute longer, is wonderfully mysterious and reflective.

[Hadelich] is ceaselessly engaged in the grand Romantic manner without ever getting bogged down...Here, you feel, is a real artist thinking things through, responding to the notes with flair, lyricism and some very full, rich tone...The famously improved Liverpool orchestra makes a very positive contribution under the excellent Hannu Lintu.