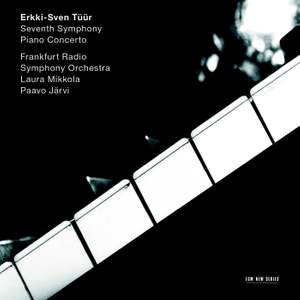 The sixth ECM New Series album by Estonian composer Erkki-Sven Tüür presents two major works, commissioned by the Hessische Rundfunk and given their premieres by the Frankfurt Radio Symphony Orchestra. Both works are powered by what Tüür calls his “vectorial writing method”, a means of developing pieces from “a source code - a gene which, as it mutates and grows, connects the dots in the fabric of the whole composition”.

Tüür’s Seventh Symphony (2009), dedicated to the Dalai Lama “and his lifelong endeavours”, is a choral symphony like no other. It is a potent work in which the orchestra only intermittently frames and supports the voices. The texts that the NDR Choir sings include words of the Buddha from the Dhammapada but also utterances of more contemporary visionaries, from Gandhi to Mother Theresa.

The earlier Piano Concerto was premiered at the Alte Oper in Frankfurt, where this album was recorded. As Paul Griffiths notes, “The concerto is also music on two planes, now orchestra and piano, though this time both are continuous and continually in the process of meeting.” Finnish pianist Laura Mikkola gives an exceptional performance, responding to the surging waves of the orchestra and the inspired direction of Paavo Järvi.

The “vectorial” process, already reflected in works including Oxymoron, Strata and Noesis (all recorded on previous ECM albums), has led to a body of work quite distinct from Tüür’s earlier, discursive ‘metalinguistic’ music in which diverse idioms - from serialism to minimalism - were contrasted, interwoven, reconciled. Tüür’s 21st century music foregoes “unnecessary eclecticism”, and manifests instead an organic coherence. These are pieces of determined, individual temperament.

the combination of logic and boldness is engrossing from first to last.

Tüür is at his most subversive in the works on this new recording...As usual, ECM's recording of these performances, which are surely the most committed one could imagine, is outstanding.

A latter-day exercise in hippie idealism? Not at all. It’s an impressive, if extravagant, symphonic argument, vivid and often violent, with a huge finale.