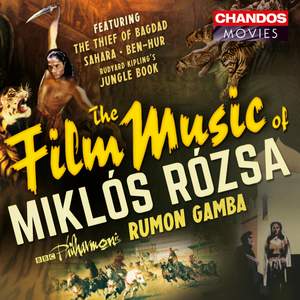 These performances by the BBC Philharmonic conducted by Rumon Gamba, who have many a cinematic credit to their name, carry the conviction of an original soundtrack recording in state-of-the-art... — Gramophone Magazine, May 2014 More…

Rozsa: The Thief of Bagdad Suite

III. The Love of the Princess

VII. The Market at Basra

V. The Ways of Man

VI. Cries of the Animals

IV. The Rowing of the Galley Slaves

VI. Parade of the Charioteers

The Hungarian composer Miklós Rózsa began writing film music at the suggestion of Arthur Honegger after achieving only moderate success with his early concert music. He went on to score ninety-five films, including some of the most famous cinematic works of all time. Here Rumon Gamba, a great champion of film music, conducts the BBC Philharmonic in some of Rózsa’s best-loved scores.

The music composed for Alexander Korda’s London Films Company between 1937 and 1942 is imbued with an amazing freshness and magical melodic expression. Nowhere is this more apparent than in the colourful scores for The Thief of Bagdad and Rudyard Kipling’s Jungle Book, suites from which are presented on this recording. The first encompasses the major events of the plot in its seven movements. The second abounds with leitmotifs, the score being more than just background music as each character has its own theme. Rózsa’s score for the World War II film Sahara is appropriately hard-hitting and the suite encapsulates all the major themes of the film. The music for Ben-Hur is regarded by many as the composer’s magnum opus among the film scores, winning Rózsa an Oscar in 1960. Befitting the epic film production, it features a large orchestra and the suite comprises six key moments from the film.

These performances by the BBC Philharmonic conducted by Rumon Gamba, who have many a cinematic credit to their name, carry the conviction of an original soundtrack recording in state-of-the-art sound.

This generously filled release is self-commending to every Rózsa fan. They will welcome new recordings of some much loved music but this will also speak to many others who simply enjoy fine, superbly crafted music.