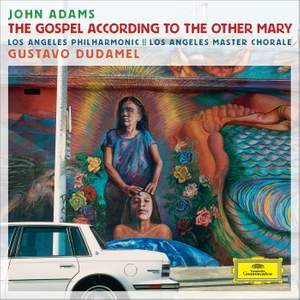 Adams, J: The Gospel According To The Other Mary

Adams, J: The Gospel According To The Other Mary

"The Next Day In The City Jail"

"And She Had A Sister Named Mary"

"I Am Surprised That I Am Beginning To Pray Daily"

"Now A Certain Man Was Sick"

"Why Standest Thou Afar Off, O Lord?"

"In My Own Quietly Explosive Here"

"When Mary Was Come Where Jesus Was"

"And When He Thus Had Spoken"

"Drop Down, Ye Heavens, From Above"

"Then Jesus Six Days Before The Passover"

"For The Grave Cannot Praise Thee"

"Then Took Mary A Pound Of Ointment"

"And There Were Some That Had Indignation"

"We Know There Will Be No Utopias"

"Tell Me: How Is This Night Different"

"Who Rips His Own Flesh Down The Seams"

"Martha And Mary, Not Knowing"

"And They Were Come Unto A Place Called Golgotha"

"Daughters Of Jerusalem, Weep Not For Me"

"Now There Stood By The Cross Of Jesus"

"When Jesus Saw His Mother"

"When The Rain Began To Fall"

"His Son Cried Out To Him"

"Now In The Place Where He Was Crucified"

Mary Awakens On The Third Morning

“And, Behold, There Was A Great Earthquake"

"Why Seek Ye The Living Among The Dead?"

Recording of the Week,  Gustavo Dudamel conducts a new oratorio by John Adams

James explores The Gospel According to the Other Mary, excellent performances from Kelley O’Connor as Mary Magdalene and Tamara Mumford as Martha.

A timely, controversial work of grand proportions, The Gospel According To The Other Mary is a new, full-scale reimagining of the Bach oratorio from composer John Adams and iconoclast writer/director Peter Sellars.

Adams and Sellars’ previous collaborations included Nixon In China, the most-performed American opera since Gershwin’s Porgy and Bess, and Dr. Atomic, an opera about the invention of the atomic bomb.

Focusing on the often marginalised perspectives of Mary Magdalene and Martha, ‘The Gospel According To The Other Mary’ sets Biblical characters and events, including the resurrection of Lazarus and the passion of Christ, in a powerfully political, contemporary light.

As with the nativity oratorio El Niño (a response to Handel’s Messiah), and the opera Dr. Atomic, the libretto hsd been assembled by Peter Sellars, who has interwoven events from the New and Old Testaments with poetry reflecting themes of faith and liberation from the 12th Century mystic Hildegard von Bingen, to the 20th Century Mexican feminist poet Rosario Castellanos.

This World Premiere recording, featuring the original cast, was made in Disney Hall, Los Angeles, at performances staged by Peter Sellars - with soloists, the Los Angeles Master Chorale and the Los Angeles Philharmonic conducted by Gustavo Dudamel.

A champion of contemporary music and social engagement through art, Gustavo Dudamel commissioned ‘The Gospel…’, together with the LA Phil, as part of a long-standing creative relationship with John Adams.

This important DG release marks the 5th Anniversary of Gustavo Dudamel’s appointment as Music Director of the Los Angeles Philharmonic and the 10th Anniversary of the LA Phil’s home, Walt Disney Concert Hall.

Packaging: the 2 CD set will come in a digisleeve with a booklet of c. 100 pages. It will contain an introduction by the composer and a synopsis by Peter Sellars in English; plus the libretto in the original languages (English and Spanish) with English translations of the Spanish texts.

Sellar's achievement is pacy, coherent and intensely moving, and builds to powerful climaxes...It provides Adams with a vehicle that has inspired music of especial fire and spirituality...Adams runs the gamut of colours with a battery of percussion...Adams and Sellars's new drama never flags. Hugely recommended.

without any visual distractions, the strengths of the score emerge powerfully...the parallels with Bach's passions are clear, but as in El Niño, Adams has created his own synthesis. Both works are unlike anything else in the choral repertoire.

the two-hour-plus epic charges ahead like a runaway train before lurching to a stop. Performances share a similar surge. There’s no place to hide from mezzo Kelley O’Connor, urgently sensuous as Mary Magdalene...Orchestrally, this is one of Adam’s strongest, most varied dramatic scores, though doubts linger over the eloquence of his vocal writing.