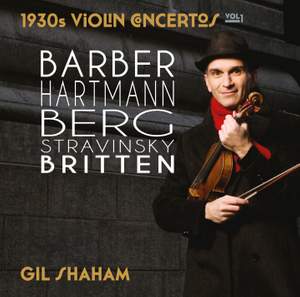 this poignant 1939 work [the Hartmann] gets an edge of the seat performance. Shaham is as convincing in the menacing central scherzo as in the plangent outer movements, and the same qualities... — BBC Music Magazine, May 2014, 4 out of 5 stars More…

Recording of the Week,  Gil Shaham plays Violin Concertos from the 1930s

The American violinist kicks off a new project exploring the decade with concertos by Barber, Hartmann, Berg, Stravinsky and Britten.

The 1930s was an incredibly rich decade for the violin concerto, thriving on what was the uncertainty of the age. Over 30 violin concertos materialized across the decade, with well over a dozen - from Stravinsky and Berg’s through to Barber’s and Britten’s concertos - all commanding iconic status within the violinist’s repertory.

Gil Shaham is the leading violinist of his generation. He was awarded an Avery Fisher Career Grant in 1990, and in 2008 he received the coveted Avery Fisher Prize. In 2012, Gil was named 'Instrumentalist of the Year' by Musical America, citing his “special kind of humanism”. Combine this “humanism” with a flawless technique and his generosity of spirit, and the musical results are nothing short of inspired.

Gil’s recording of the Barber Violin Concerto displays his trademark rich soulfulness as well as the sounds of urban America when called for - skyscrapers and sirens clearly manifest themselves in the last movement. The weeping, if not lamenting, solo violin in the Berg concerto, harmonized with very poignant 12-tone chords, reveals emotionally charged heart on sleeve mourning in this recording.

For Hartmann’s Concerto funebre, Gil is reunited with acclaimed Sejong Soloists, with whom he has recorded Mendelssohn’s octet and Haydn concerti (CC08), the New York Times observing from a concert performance of the Hartmann that Shaham “perfectly characterized the work’s anguished and occasionally angry spirit”.

Stravinsky’s Violin Concerto is a concerto with which Gil and conductor David Robertson have performed together countless times. The result is an interpretation which is luminous, light and dancing, The Times noting from this performance that “Shaham’s interpretation was exceptionally spirited and fresh, always at one with the incisive accompaniment from Robertson’s orchestra”.

Benjamin Britten’s concerto is arguably the most challenging to play on this collection and the most sobering work here, and shows another side of Shaham’s musical personality. A work with a martial-like drama, and for the most part a forceful, bordering on violent, execution of the work unfolds, interspersed - where called for - by an ethereal sound world bordering on the surreal. The tonal ambiguity at the end of the third movement is positively haunting. In concert, the Chicago Classical Review noted “This is music that fits Gil Shaham like a well-tailored glove.”

this poignant 1939 work [the Hartmann] gets an edge of the seat performance. Shaham is as convincing in the menacing central scherzo as in the plangent outer movements, and the same qualities surface in the Berg. Here the recorded balance is contrived at times...But there's power in the tuttis, and the wind-down into the Bach chorale is beautifully paced.

He finds unexpected parallels of rhapsodic beauty in Barber and Berg, captures the introspective intensity of Hartmann’s Concerto funèbre and infuses Stravinsky with wit and surprising tenderness. Best of all is Britten’s concerto – a performance of rare subtlety and feeling.

What first struck me about this initial colume is how Shaham, a fine musician even 20 or so years ago, has matured as a player...his range of expression wider, more sensitive to the rise and fall of a phrase...this is a most distinguished release and I can't wait for the second instalment.

I’ve always been a huge admirer of Gil Shaham’s warm and rich playing, and this music really suits him perfectly. He is an immensely passionate player, although always careful not to over-indulge...there is a real sense of occasion about these recordings, yet they still sound technically virtually faultless and the balance and general recorded sound is superb.