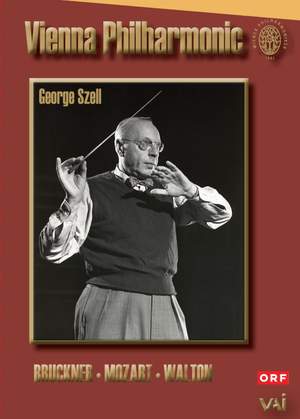 Walton: Variations on a Theme by Hindemith

This rare visual document provides an exciting opportunity to see George Szell (1897-1970) conduct the orchestra of the city of his musical roots. It bears witness to Szell’s sublime rapport with the great Vienna Philharmonic and the orchestra’s wholehearted response to his authoritive leadership. Included in the programme is Variations on a Theme by Hindemith by Sir William Walton, a composer whom Szell long championed. At the conclusion of the performance , the conductor brings Sir William on stage for several bows – a moment of history captured on video. That so little of Szell’s televised legacy survives makes these performances - taken from 1966 and 1968, with Szell at the height of his formidable powers – of the greatest interest and importance.