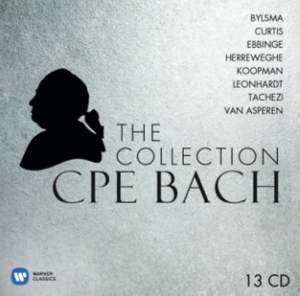 Orchestra of the Age of Enlightenment, Amsterdam Baroque Orchestra, Melante Amsterdam, Choir of the Collegium...

this is a superb box set and a great boost to anyone’s music collection, C.P.E. Bach or otherwise. It’s stuffed with refreshingly vibrant performances and recordings, and is a joy to dip into... — MusicWeb International, 16th May 2014 More…

Marking the 300th anniversary of Carl Philipp Emmanuel Bach’s birth in 1714, this 13-CD box at budget price presents a survey of his greatest works, performed by some of the most renowned musicians in the world of historically informed performance.

Carl Philipp Emmanuel Bach (1714-1788), the second son of JS Bach, was a celebrated figure in his lifetime and is recognised as a crucial figure in the transition from the Baroque to the Classical styles. Mozart, no less, said of him: "He is the father, we are the children.”

Both a composer and an important musical theorist, CPE Bach composed in diverse genres, including keyboard works for both harpsichord and fortepiano, flute sonatas and concertos (written for King Frederick of Prussia), symphonies and choral music. Like his older brother, Wilhelm Friedemann, he was an exponent of Empfindsamkeit (sensibility) or Empfindsamer Stil (sensitive style); this aesthetic, which exploited emotional variety and contrast, became prevalent in Northern German music in the 18th century.

This collection features some of the most renowned and influential figures in historically informed performance, including Gustav Leonhardt, Ton Koopman, Bob van Asperen, Philippe Herreweghe, Anner Bylsma and Alan Curtis, whose recording of the Rondos for fortepiano appears on CD for the first time.

this is a superb box set and a great boost to anyone’s music collection, C.P.E. Bach or otherwise. It’s stuffed with refreshingly vibrant performances and recordings, and is a joy to dip into or even to dive in and wade through in unseemly haste.