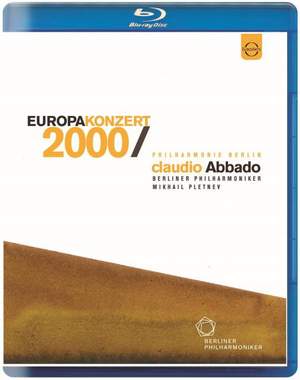 Recorded live at the Philharmonie Berlin, 1 May 2000

The founding of the Berliner Philharmoniker on the first of May in 1882 is annually celebrated with a concert in a European city of cultural significance. For this newly released EUROPAKONZERT Blu-ray Disc all recordings were lovingly restored and converted to High Definition video. The 10th EUROPAKONZERT was performed in the newmillennium, in the year 2000, at the very home of the Berliner Philharmoniker: the Philharmonie in Berlin.

Instrumentalist Mikhael Pletnev was awarded the gold medal and won the first prize at the International Tchaikovsky Competition 1978.

Despite its name, Beethoven’s Concerto No. 2 for Piano and Orchestra was actually his first concerto for piano and orchestra.

His 9th symphony is one of classical music’s “evergreens” and the secret anthem of a free Europe.

BD is enhanced by an enticing documentary about the Berlin of the period of recording – a Berlin still “in the making”.