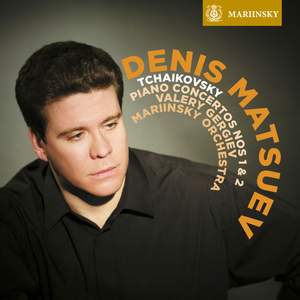 An energetic reading, robust, demonstrative, flashy…Let us bow before the purely technical qualties of Matsuev, who swallows the deadliest features with speed and sometimes staggering accuracy. — Diapason More…

Since winning the 11th International Tchaikovsky Competition in 1998, Denis Matsuev has established a reputation as one of Russia's leading pianists. His début release on the Mariinsky label featuring Rachmaninov’s Piano Concerto No 3 and Paganini Variations, received widespread acclaim. His second Mariinsky release featured piano concerts by Shostakovich and Shchedrin, which was awarded Clef du Mois by ResMusica and ***** by Audiophile Audition. For his third release, Matsuev turns to the music of Tchaikovsky, with the two Piano Concertos. His first Piano Concerto is one of his most popular works: Tchaikovsky balances core motivic elements with a sense of lyrical spontaneity to create a technically challenging but instantly appealing work.

The Piano Concerto No.2 was dedicated to pianist Nikolai Rubinstein, with whom the composer had a close working relationship. Tchaikovsky wrote, “I want to dedicate it to N. G. Rubinstein in recognition of his magnificent playing of my First Concerto and of my Sonata, which left me in utter rapture after he performed it for me in Moscow.” After a tremendous piano cadenza in the first movement, Tchaikovsky allows other instruments to shine, with prominent solos for violin and cello in the second movement.

Other Tchaikovsky recordings on the Mariinsky label include a DVD/Bluray release of his last three symphonies, and 2011 Tchaikovsky Competition winner Daniil Trifonov’s interpretation of the first Piano Concerto on SACD.

In March and April Denis Matsuev joins the London Symphony Orchestra and Valery Gergiev for a European tour, with concerts in London, Paris and Turin.

An energetic reading, robust, demonstrative, flashy…Let us bow before the purely technical qualties of Matsuev, who swallows the deadliest features with speed and sometimes staggering accuracy.

I doubt if you will ever hear [the B flat minor Concerto] more viscerally thrilling and sumptuously engineered than here. Listening to Matsuev and Gergiev is the aural equivalent of watching Federer and Nadal...If this isn't the greatest performance on disc, it is certainly now my personal benchmark...Matsuev and Gergiev give a similarly blistering account of the G major Concerto.

The performances are never less than technically assured and anyone coming to them with experience of other recordings will certainly find that Messrs. Matsuev and Gergiev offer an invariably interesting and often quite striking alternative approach.