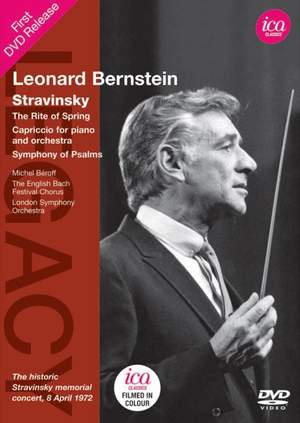 Burton is excellent...at deftly intercutting the orchestral with Bernstein's riveting conducting, which conveys an amazing range of rhythmic and dynamic distinctions...The performance itself... — BBC Music Magazine, June 2014, 4 out of 5 stars More…

This memorial concert took place at the Royal Albert Hall in April 1972 on the first anniversary of the death of Igor Stravinsky, ‘the last great father-figure of Western music’ (Leonard Bernstein). Conducted by Bernstein, this electrifying, unique event is now being reintroduced to the public in DVD form.

Bernstein was a regular visitor to the UK, performing with a number of London orchestras, but this glamorous concert – a memorial tribute to Stravinsky given in the presence of the UK prime minister Edward Heath – was a particularly special event. Bernstein called it an homage to Stravinsky’s universality and chose the three featured masterpieces for their suggestion of ‘the extraordinary range of his art’.

Leonard Bernstein was renowned for his passion for Stravinsky’s music, having first conducted The Rite of Spring with the Boston Symphony Orchestra under Serge Koussevitsky in 1947, the only time Koussevitsky ever allowed a guest conductor to appear with his orchestra in that city – it was an indication of the success that was to follow for the young Bernstein. The performance on this DVD takes place twenty-five years later, with the virtuosic LSO on peak form, filmed in colour.

Humphrey Burton, an eminent broadcaster, biographer and director, enjoyed a twenty-year association with Bernstein, during which he directed over 170 concerts and documentaries. The author of the booklet note for this DVD, he also produced and directed the Homage to Stravinsky for television. He recently described the performance of The Rite as ‘the most stunning reportage of Leonard Bernstein’s conducting that I have ever seen’.

A few days after the performance on this DVD, Bernstein conducted the LSO in The Rite at Abbey Road in an experimental studio production.

Michel Béroff is the stunning soloist in Stravinsky’s Capriccio for piano and orchestra. At this time he was already making an international name for himself as an advocate of Stravinsky’s music, amongst other contemporary composers, having won the Messiaen competition five years prior to this performance.

Stravinsky’s Symphony of Psalms is the final work of the programme, a work that Bernstein felt revealed the ‘devotional Stravinsky, the true believer.’ He called it ‘undeniably the greatest musical celebration of the religious spirit to have been written in our century.’

Burton is excellent...at deftly intercutting the orchestral with Bernstein's riveting conducting, which conveys an amazing range of rhythmic and dynamic distinctions...The performance itself is by turns mesmerisingly textured and blisteringly powerful, and is playing with coruscating brilliance by the orchestra.

The conductor takes the limelight, animating old Russian tunes from within and giving the music’s primal urge tumultuous momentum.

a magnetic performance which is full of the primitive savagery and energy of the music but which also reminds us that Stravinsky’s score contains a wealth of subtle detail. On this kind of form I wonder if there has ever been a conductor better equipped to translate Stravinsky’s vision into aural reality.