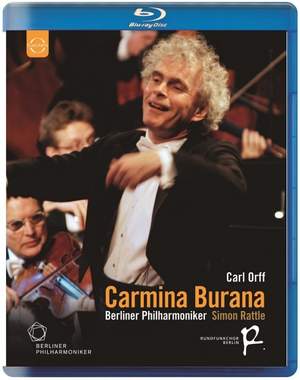 A joyful celebration welcoming the New Year, this Gala from Berlin presents the world-renowned Berlin Philharmonic, conducted by Sir Simon Rattle, in Carl Orff’s famous Carmina Burana, an intensely dramatic cantata that remains one of the most widely performed works from the twentieth century.

Carl Orff’s Carmina Burana is one of the most popular and exiting classical works.

Christian Gerhaher had received his second Echo-Klassik in the year of the recording of this performance.

This is the only Carmina Burana on Blu-ray Disc to date.

IMPORTANT NOTE FROM PRESTO CLASSICAL - Although this claims to be HD quality, in reality the picture quality is very poor, and it appears no better than the DVD version.

At times Rattle's penchant for brisk tempi raised a few eyebrows, although with the visual elements this feels less worrisome.