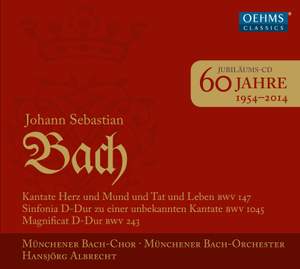 The Munich Bach Choir has been in existence since 1954. Karl Richter, a Crucian and later organist at St. Thomas‘s Church in Leipzig, had taken over the Heinrich Schütz Circle there when he was appointed to St. Mark‘s Church in Munich in 1951. He soon gave the Choir a more powerful name – the Munich Bach Choir. Since 2005 the Choir and Orchestra have been directed by Hansjörg Albrecht, whose soloist career has also been accompanied by OehmsClassics for many years.