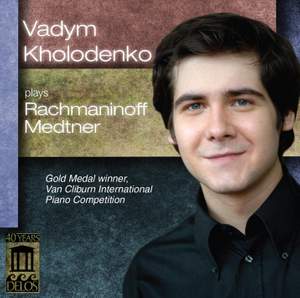 As Delos director (and revered pianist) Carol Rosenberger wrote in her foreword to this release’s booklet, "The legendary Russian pianism of yesteryear is alive and well! When I listen to Vadym play the piano, I feel that I am witnessing a musical reincarnation."

The qualities she alludes to are the same ones that inspired the 2013 Van Cliburn Competition’s judges to award their top prize to Vadym Kholodenko. And “Russian pianism” is, of course, best demonstrated via the interpretation of Russian composers’ music – as proven here in Vadym’s choice of relatively uncommon repertoire from two of Russian music’s “golden-age” composer-pianists: nine of Sergei Rachmaninov’s thirteen intriguing piano transcriptions, plus Nikolai Medtner’s brilliant, but unjustly neglected “Night Wind” Sonata in E minor (his seventh) – considered his supreme masterpiece.

And Vadym – in the course of his now-demanding touring schedule – is rapidly gaining rabid new fans wherever he performs!

[Kholodenko] gets inside [Medtner's] turbulent score with technique and stamina to spare...The selection of Rachmaninov transcriptions comes off splendidly. Kholodenko conveys his obvious enjoyment of their sophisticated craftsmanship...There's a welcome measure, too, of charm and good humour in the two Kreisler paraphrases...We shall be hearing a lot more of Kholodenko.