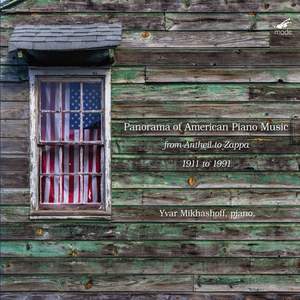 There are some real rarities here...while the stylistic range is formidably wide...It's sometimes bitty and inconsequential, but always engaging – and a fine memorial to an intrepid musician. — The Guardian, 19th June 2014, 3 out of 5 stars More…

Ornstein: Suicide in an Airplane

Suicide in an Airplane, SO 6

In a Nutshell: III. Pastoral (Version for Piano Solo)

Piano Sonata No. 3 "Death of Machines": I. Moderato

Bloch, E: Poems of the Sea

Poems of the Sea: II. Chanty (Version for Piano Solo)

Confrey: Nickel in the Slot

Brant, H: Music for a Five and Dime

Sessions: From my diary

Copland: Our Town (version for piano)

7 Anniversaries: No. 1, For Aaron Copland

7 Anniversaries: No. 7, For William Schuman

American Ballads: I. Streets of Laredo

For a Happy Occasion

Glanville-Hicks: Prelude for a Pensive Pupil

Zappa, Frank: Piano Introduction to "Little House I Used to Live In"

Davidovsky, M: Synchronisms No. 6 for Piano and Electronic Sounds

Cage: 49 Waltzes for the Five Boroughs

A Summerfield Set: I. Sonata (Version for Piano Solo)

'Panorama of American Piano Music' is a comprehensive survey of 20th century piano works, beginning with Ives’ “The Alcotts” movement from the 'Concord Sonata' (1912) through Lou Harrison’s 'Summerfield Set' (1988). Every decade is represented with works from between those years. Pianist Yvar Mikhashoff (1941–93) was a master at presenting marathon concerts on a single theme. The 'Panorama' was one of them, exploring the remarkable diversity of 20th century American music, from serialism to minimalism, populist to avant garde experimentalism, short works for amateur pianists to virtuoso pieces. Never before has such a survey of piano music been represented.

62 works, presented in chronological order, from composers Antheil to Zappa, written between the years 1912-88. Over 15 first recordings, including Copland, Bowles, Thomson and LaMonte Young. Many works are unpublished, some taken from manuscripts.

There are some real rarities here...while the stylistic range is formidably wide...It's sometimes bitty and inconsequential, but always engaging – and a fine memorial to an intrepid musician.