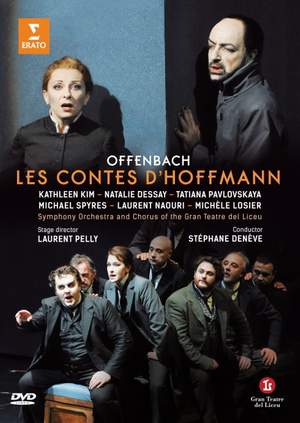 The production belongs to Laurent Naouri who finds something truly distinctive in each of his portraits...Dessay is remarkable as Antonia...If Michael Spyres's Hoffmann isn't quite the centre... — BBC Music Magazine, June 2014, 4 out of 5 stars More…

Based on the stories of the influential German writer ETA Hoffmann, filled with magic, dark humour and grotesquerie, Les Contes d’Hoffmann has a complex structure with three acts in ‘flashback’ as the drunken poet Hoffmann recalls three unhappy love affairs.The opera itself has a complex history too, since Offenbach died before completing it, and it exists in a number of editions. This performance used the version prepared by Michael Kaye and Jean-Christophe Keck, which has been welcomed for its dramatic power. As the Los Angeles Daily News said: “Kaye’s edition clarifies, intensifies, redefines and transforms Hoffmann into a more unified and ultimately more powerful work.”

Pelly’s production looks unusually dark and sober, while the monumental elements of the decor move smoothly around the singers, dominating them in sinister fashion. The staging has also been in seen in San Francisco, where it was greeted thus by Opera Today: “Pelly’s production is magnificent, making E.T.A. Hoffmann’s short horror stories into a dream fantasy where anything real becomes surreal, where anything physical is ephemeral ... Images appear and disappear without a logic, as stream-of-unconscious. Pelly’s conceit is based on the Olympia episode ... where magic dissolves into stagecraft when Olympia [an animated doll rather than a real woman] is revealed as a manipulation of three stagehands. We then become conscious that the continuous flow of images is effected by the most basic level of stage mechanics — men pushing scenery and men pulling ropes. And we become even more amazed by the intelligence behind the when and how of it all. It is a diabolical staging in an opera where there is nothing but diabolical manipulation of ... nothing.”

Natalie Dessay takes the role of Antonia, Hoffmann’s beloved in the most substantial and tragic of the three episodes, bringing her delicate presence and immaculate French style to the character of a young, physically fragile woman whose talent – singing – is finally fatal to her. The automaton Olympia is sung by the charming coloratura soprano Kathleen Kim, who rose to fame in the role at the Metropolitan Opera, New York. Hoffmann’s third love, the Venetian courtesan Giulietta is embodied by the sensual mezzo-soprano Tatiana Pavlovskaya, and his loyal friend Nicklausse by another mezzo-soprano, the elegant Canadian singer Michèle Losier. Hoffmann’s nemesis, who takes the form of four different characters, is incarnated by the superb French bass-baritone Laurent Naouri, while Hoffmann himself is the young American tenor Michael Spyres, who has shot to prominence over recent seasons with his prowess in 19th century French opera and bel canto. The conductor is Stéphane Denève, of whom the British critic David Nice, writing for The Arts Desk, recently said: “I can honestly say there’s no conductor alive I’d rather hear in French music.”

The production belongs to Laurent Naouri who finds something truly distinctive in each of his portraits...Dessay is remarkable as Antonia...If Michael Spyres's Hoffmann isn't quite the centre of his own tales nevertheless he sounds a properly French tenor. Stephane Denève in the pit keeps the tension rising.

Pelly's production...is straightforward: no gimmicks...The women are all good...If Michael Spyres doesn't have quite enough heft, his portrayal of the title-role, dishevelled or elegant, carries conviction. Laurent Naouri is outstanding as the villains. Stéphane Denève whips up the excitement where required.

Pelly’s production is neat and traditional and he elicits some strong performances. Stéphane Denève conducts an appropriately large-boned account of the score...Spyres’ Hoffmann is very much in the lyric mode...his singing is stylish, his French good, and his chubby innocence suits the role.