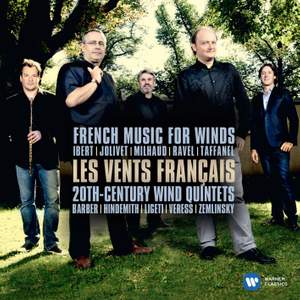 individually, they play with attractive timbre and immaculate intonation and articulation. Collectively, they blend their colours with great finesse, within dynamics ranging from cushioned pianissimo... — BBC Music Magazine, May 2014, 4 out of 5 stars More…

Emmanuel Pahud and company are on ‘beautifully burnished’ form in a 2-CD album of music by Paul Taffanel, Ligeti, Milhaud, Ibert, Ravel, Jolivet, Zemlinsky and more.

A double CD of wind quintets from Warner Classics exclusive artist, Emmanuel Pahud, and his colleagues in Les Vents Français (Emmanuel Pahud, Paul Meyer, Francois Leleux, Gilbert Audin, Radovan Vlatkovic). Les Vents Francais celebrate French wind music at its elegant, witty best. Pahud is greatly in demand as a chamber musician and in this context has collaborated with most of the world's top soloists. As far as Pahud is concerned, ‘it’s like having two musical lives, but one musical world.’ Previously release in Japan the album won a Record Academy Award for Chamber Music.

individually, they play with attractive timbre and immaculate intonation and articulation. Collectively, they blend their colours with great finesse, within dynamics ranging from cushioned pianissimo to bright fortissimo, the latter enhanced by an upfront recording.

Variety of style is a winning suit of this set, played throughout with terrific aplomb.

Wind players, professional or amateur, will need no second invitation to sample this new quintet collection...Non-wind-playing listeners keen to explore a hitherto unknown repertoire could also do far worse than start here...the playing on this new Warner is practically unbeatable.

Individual players come out of the texture where necessary, but all five are perfectly able to blend and sound as one unit...there’s much to enjoy here. I don’t think you could ask for five more accomplished players; every single one of them is at the top of his game, and for me at least there were several pleasing discoveries in terms of new repertoire. Highly entertaining!

Les Vents Français is the wind-quintet equivalent of a supergroup. All its members...are international soloists in their own right, and their performances, as you'd expect, have a marvellous fluency and dazzling range of colour, even if there are moments when things get too indulgent.

this set offers a fascinating portrait of inter-war musical manners in the last century.

If you buy just one wind-quintet recording in your life, buy this fabulous double album. Les Vents Français are so precise, yet full of fun, subtleties and flights of virtuosity as they tackle 19th- and 20th-century classics...Impertinent, insouciant, irresistible.