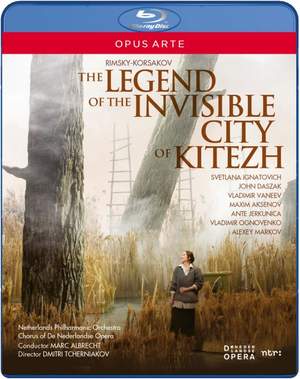 Offer, Rimsky Korsakov: The Legend of the Invisible City of Kitezh and the Maiden Fevronia

Rimsky-Korsakov’s opera is a fanciful fairytale, yet at the same time a parable on repression and political conceit. The peasant girl Fevroniya’s prayer that the city of Kitezh becomes invisible, thus protecting it from Tatar attack, is magically heeded. The girl herself, however, is captured by the invaders. The leitmotifs and highly expressive musical tone-painting tell the story, based on a pantheist world view, almost on their own. Grand crowd scenes contrast with a internal treatment similar to the music dramas of Richard Wagner. Marc Albrecht conducts the Netherlands Philharmonic Orchestra and the dramatic staging comes from the renowned Russian director, Dmitri Tcherniakov.

A fairy-tale opera: peasant girl Fevroniya dreams that the city of Kitezh would become invisible to save it from Tatar attack, and it magically comes true.

Conducted by Marc Albrecht with Netherlands Philharmonic on inspired form.

Extra features: Interviews with cast and crew and a cast gallery.

This deeply felt production...is a significant step further in the internationalisation of the opera...The committed theatricality of the cast...goes far to making the production convincing on its own terms...[Ignatovich] sings without strain or fatigue. This could be a career-making performance.

Purely musically this is a performance of overwhelming power, and no praise could be too high for the orchestral playing and the contribution of the double chorus under Marc Albrecht.