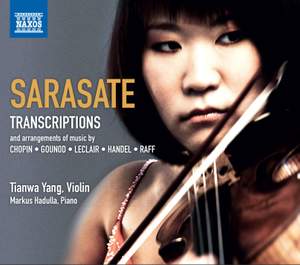 The finale to this critically-acclaimed four-disc series contains some of Sarasate’s greatest – and also some of his rarest – transcriptions and arrangements, some of which have been in the repertoire of violinists since they were published. They include a delectable Chopin sequence, arrangements inspired by the music of French Baroque violinists, an early and beautifully constructed Souvenirs de Faust based on Gounod, and Sarasate’s own favourite concert piece, Raff’s La fée d’amour. “Yang throws off merciless chains of double stops and fingercrippling arabesques with scintillating aplomb … simply inimitable … Bravo!” (BBC Music Magazine on Volume 3, 8570893)

We encounter Sarasate’s spontaneity and coalescence of tenacity and timidity in these distinctly Spanish-sounding transcriptions and arrangements...Yang conveys Chopin’s silky Nocturne No. 2 with an open humility and richness of sensitivity, rather than an aloof aristocracy so often heard in the playing of Chopin’s nocturnes.