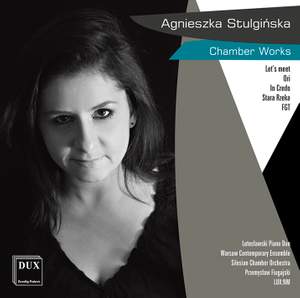 The music of Agnieszka Stulgińska should be examined in the broader context of the activities of the group of Polish composers who made their debut in the first decade of the twenty-first century. What they share, however, are a predilection for uncompromising sound experiments as well as the strong psychological and emotional impact of their music. This release is the first attempt to sum up Stulgińska’s compositional achievements to date. It features works, written over a period of six years, which demonstrates an evolution of her style, from ‘musical documentation’ to more abstract pieces probing into the intricacies and metaphysical dimension of sound.