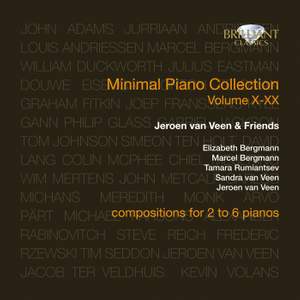 Compositions for 2 to 6 pianos

Superbly performed and very well engineered, these are recordings which can stand alongside any in similar repertoire. As an introduction and deepening of one’s experiences with the world of... — MusicWeb International, January 2011 More…

Meijering, Ch: Fast, cheap and out of control

Meijering, Ch: She disappears in my dreams

Meijering, Ch: A place of coolness

Meijering, Ch: Don't put me in your box

Meijering, Ch: Why is the flag fluttering in the wind

Meijering, Ch: Go where the angels are

Metcalf, John: Never Odd or Even

Pärt: Hymn to a Great City for two pianos

Veldhuis: Views from a Dutch Train

Glass, P: In Again Out Again

Lang, D: Orpheus Over and Over

The Minimal Piano Collection for one piano (BC8551) ended with “In C” by Terry Riley. Many of the composers on this new 11 Cd box have stated that this particular piece was a starting point for them to compose in a new way, exploring the ways that were created, the spaces between the notes, the emptiness, the freedom.

This set will not only please the customers who bought the white box, but also anyone looking for interesting music from American, British, Canadian, Dutch and many more composers who wrote beautiful tonal repetitive music for two or more pianos. Many customers use the Minimal Collection to get inspired, or to work with or simply to enjoy. Get carried away by the new black box; 854 minutes of wonderful music, enjoy the Minimal Piano Collection, let the journey begin including a few recording premieres!

Superbly performed and very well engineered, these are recordings which can stand alongside any in similar repertoire. As an introduction and deepening of one’s experiences with the world of ‘repetitive’ music this is likely to be an eye or ear-opener for many, including die-hard fans like myself...If your experiences of minimalism until now have been negative, this is a perfect place to commence rehabilitation.