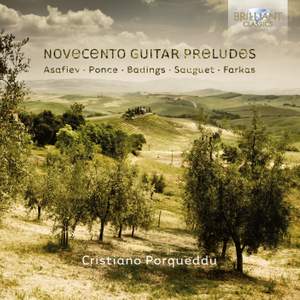 Prelude No. 1 in C Major

Prelude No. 2 in A Minor

Prelude No. 3 in G Major

Prelude No. 4 in E Minor

Prelude No. 5 in D Major

Prelude No. 6 in B Minor

Prelude No. 7 in A Major

Prelude No. 8 in F-Sharp Minor

Prelude No. 9 in E Major

Prelude No. 10 in C-Sharp Minor

Prelude No. 12 in G-Sharp Minor

Prelude No. 13 in F-Sharp Major

Prelude No. 14 in D-Sharp Minor

Prelude No. 15 in D-Flat Major

Prelude No. 16 in B-Flat Minor

Prelude No. 21 in B-Flat Major

Prelude No. 19 in E-Flat Major

Prelude No. 17 in A-Flat Major

No. 12. Cavatina, "omaggio a Donizetti": Andante

No. 18. In modo romatico, "omaggio a Schumann": Andante

A fascinating survey of 20th century Preludes for guitar solo.

The prelude, originally an introduction to a more complex form (for instance a fugue), started living its own independent life with J.S. Bach, and developed in the 19th century into a relatively short (roughly between half and five minutes) character piece in free form. Famous examples are the preludes of Chopin.

Cristiano Porqueddu is one of the world’s best and most adventurous guitarists, his previous recordings for Brilliant Classics of Barrios (BC 9204), Gilardino (BC 8886) and Sor (BC 9205) having won high praise from the international press.

This collection brings together guitar preludes by Asafiev and Ponce, and includes world premiere recordings of Badings’s 12 Preludes, Sauget’s 3 Preludes and Farkas’s Exercitium Tonale. Despite their very different styles, these composers are all linked together by a single trait: none of them were guitarists. Originally bemoaned by patron Andrés Segovia for their fiendish difficulty, Ponce’s 24 Preludes begin the compilation.

Cast in each of the major and minor keys, and arranged in a circle of fifths, they are followed by Asafiev’s 12 Preludes – which, written in a single day, were probably intended as a single piece. This is also true of Bading’s ensuing 12 Preludes, as confirmed by the same harmonic progression with which the work begins and ends. From the use of contrasts that appear throughout the movements, as exemplified in the strong, primitive rhythms of ‘Yaya’, to the air of mystery and timelessness that pervades Sauguet’s offering, the compilation continues its stylistic journey, ending with Farkas’s Exercitium tonale of 1982 – a work which hints at a composer unafraid to push the performer to their limits or to be unpredictable in his use of harmony and counterpoint.

Cristiano Porqueddu, described as ‘a point of reference for the new generation of guitarists’, graduated from the Lorenzo Perosi International Academy in Biella, Italy. With an extensive knowledge of the technique and interpretation of 19th and 20th century music, he has won numerous international awards and now sits on the jury of several major guitar competitions. This is Porqueddu’s second recording for Brilliant Classics.