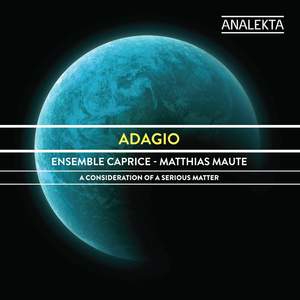 Adagio: A Consideration of a Serious Matter

Charles Ives gave two titles to his most famous composition. The piece generally known as The Unanswered Question, featuring a trumpet call repeating the same earnest question seven times, was also listed by the composer under the title A Consideration of a Serious Matter.

This wonderful title soon became the programmatic idea behind our recording of adagios throughout the centuries. Centered around Bach’s sad yet mysteriously joyful aria Ich habe genug, there emerged a colourful array of choral and orchestral pieces, all having one element in common: they are all meditations on the fundamental questions of life and death and express something impossible to communicate through words.

As we were recording the album we began to feel as if the different pieces were “reacting” to one another. It was almost as if the composers were having an intense conversation across the centuries, with no existing time barriers.

Jan Dismas Zelenka’s 1738 Miserere, an outburst of utter despair, finds a distant echo two centuries later in Charles Ives’ The Unanswered Question. According to the American composer himself, the quartet of wind instruments expresses the growing unrest of human beings who feel increasingly unsettled as they come face to face with the inexorability of destiny, as rendered tangible by the ethereal sounds of the strings.

Throughout history, composers have attempted to express the seemingly endless pain of human suffering through music. The examples contained on this recording are among some of the most powerful explorations of this emotional space.