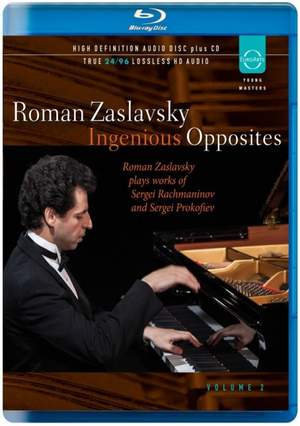 Roman Zaslavsky is a master of piano technique that espouses nuance without resorting to arbitrary mannerisms, hegained recognition by taking 1st prize - the Primer Gran Premio - at the José Iturbi International Music Competition in Valencia, Spain.

Ingenious Opposites Vol.2 presents two composers, Sergei Rachmaninov and Sergei Prokofiev, who were very differentthough being contemporaries, Prokofiev was open for the new, wanted to finish with Romanticism and turned towardsModernism, while Rachmaninov was rooted in Romantiscism and continued this tradition in his own way.

HD Audio productions in line produced without compromise using the Direct A/D (analog to digital) technique whichdelivers the culmination of sound clarity realized by the use of the state-of-the-art digital microphone system thattransfers the direct signal with a dynamic range of up to 130dB by eliminating all sound shaping and dynamic losscreating stages in the signal.

The Audio Blu-ray Disc comes with True 24/96 Lossless HD Audio , for which the first issue of Ingenious Oppositesreceived the Supersonic award from the pizzicato magazine.