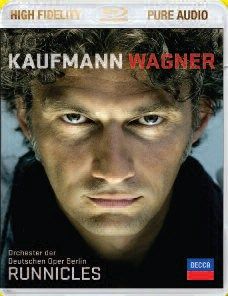 This new disc is mostly magnificent, but had me pining for more...Kaufmann may never sing Siegfried in the theatre, but the Forest Murmurs here, in an usually extended version, makes one long... — BBC Music Magazine, May 2013, 5 out of 5 stars More…

Kaufmann’s fifth solo album on Decca is specially recorded for the Wagner anniversary year by the world’s leading Wagner tenor. Kaufmann and Wagner is a classic combination: “For any Wagnerians who've been slumbering, Fafner-like, in their caves during the last few years, here's your wake-up call: Jonas Kaufmann is the tenor we've been waiting for” (Washington Post).

Joined by one of the most formidable combinations in the opera world today – the chorus and orchestra of the Deutsche Oper, Berlin, under director Donald Runnicles – this recording is also a sonic spectacular, made in Decca’s time-honoured tradition.

A physical high-resolution Pure Audio format, using existing Blu-ray technology; no video content. It is intended for playback on any Blu-ray disc player, giving it an advantage over previous high-definition standards (such as SACD) which required specific hardware; navigated with the remote control of your Blu-ray player.

NB: This product is audio-only: there are no images or video-content. It also requires a Blu-ray player and will not play on standard CD-players.

This new disc is mostly magnificent, but had me pining for more...Kaufmann may never sing Siegfried in the theatre, but the Forest Murmurs here, in an usually extended version, makes one long to hear him in the complete role; the Tannhäuser Rome Narration even more so, a shattering account...all told this is a further testimony to [Kaufmann's] lonely greatness among contemporary Wagner tenors.

a matchless Wagner recital...Tannhäuser’s Act 3 Rome Narration is a triumph of heroic timbre, dramatic intensity and musical sensibility...The gem for me is the Wesendonck Lieder, intended for soprano and yet, thanks to singing of such melting ardour, perfectly “owned” by the world’s leading Wagner tenor.

Turn immediately to the Tannhäuser excerpt...Kaufmann both darkens and stresses up his voice to portray the failed pilgrim's predicament...The other operatic excerpts...also find the tenor pushing the confines of a recital disc excitingly towards the level of live performance...the disc is something of a triumph.

a magnificent display of musical talent and recording excellence.

As Siegmund, his dark, baritonal timbre comes into its own. In Rienzi’s Prayer and Tannhäuser’s Roman narration, his Italianate timbre — surely what Wagner wanted — easily negotiates the bel canto turns and grace notes overlooked by burlier singers...No Wagner tenor sings Lieder with such musicianship, colour and sensitivity. With this glorious disc, Kaufmann sets a standard for our time.

His artistry is exceptional. His sexy, heroic way with Siegmund, and the marvellous introversion he brings to Lohengrin's In Fernem Land, leave us in no doubt as to why he is today's interpreter of choice for both roles. Yet he brings the same insight and intensity to his new material...Best of all is Rienzi's prayer, in which his almost oceanic tone blends with the elegance of the fine Mozart singer he once was.

This recording has all the allure and dark beauty of his singing...but also the thoughtfulness of an artist who does not take his stardom for granted. His rendition of the “Wesendonck Lieder” — rarely sung by men — has Mahlerian desolation and elation.

To judge from the performances on this wide-ranging sampler, the Met's new Parsifal seems ready for coronation as the reigning Wagnerian tenor of his generation.

Kaufmann is so careful that the sudden fire of some of his operatic performances can shock...[He] lets us in to the naivety and the purity of [Siegfried]...his enacting of Tannhäuser’s “Rome Narrative...is tremendously effective...it is as near to an internal Tannhäuser as we are going to get

When I listen to Wagner, this is how I dream it should sound