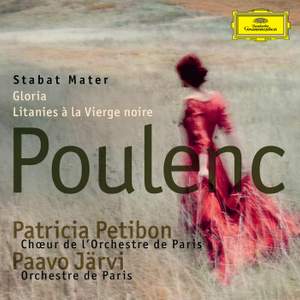 Recording of the Week,  Poulenc from Patricia Petibon and Paavo Järvi

The fiftieth anniversary of the composer’s death is marked by outstanding performances of three of his sacred works: the Gloria, Stabat mater, and Litanies à la Vierge*.

This major new release for Poulenc year brings together music of breathtaking beauty and originality, as well as Poulenc’s profoundly human spirituality. The album also features Poulenc’s passionate ‘Litanies à la Vierge noire’ (‘Litanies to the black Madonna’), written in response to the tragic death of a fellow composer – a work new to the DG catalogue and performed in the composer’s lesser-known arrangement with orchestral accompaniment. The album is released ahead of the December premiere of a high-profile new production of Poulenc’s famous sacred opera Dialogues des Carmélites at the Théâtre des Champs-Elysées, in which Patricia Petibon will debut the leading role of Blanche de La Force – an event which will focus the musical world on the memory of a French composer with a truly individual voice.

The performances by the Orchestre et Choeur de l’Orchestre de Paris under Paavo Järvi are superb: the upper voices are outstanding for their warmth and purity, and some occasional rawness in the tenors is the only small blot on a choral sound which manages to be sensuous but never sleazy, and incisive without ever sounding mannered.