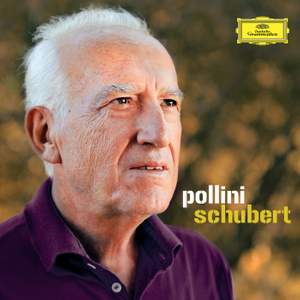 No.2 In E Flat (Allegretto)

Here are Maurizio Pollini’s complete Schubert recordings, brought together for the first time in a single set. “A feast of fine Schubert playing … what a sovereign pianist Pollini is” – Gramophone (Late Sonatas). Pollini’s Schubert recordings are among the greatest that he has ever made – both the early LP from 1974 of the Wanderer Fantasy and A minor Sonata, and the double album from the 1980s bringing together the three Late Sonatas and late piano pieces.

They’re all on The Originals, but this is the first time we’ve brought them together in a single box, as part of the Maurizio Pollini Collection – the fifth in the series which has sold nearly 22,000 sets in the last two years. As with the previous boxes in the series (Chopin, 20th Century, Schumann, Concertos), the booklet presents original covers, comments on the recordings from a reputable critic (here Jed Distler), and, in this case, the original liner notes as well.