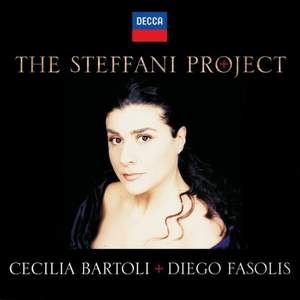 Steffani: A facile vittoria (from Tassilone)

Steffani: Non Plus Me Ligate

For the first time together, all three releases of Cecilia Bartoli’s unique Steffani project are being presented as a gift package, marking a lasting tribute to a first rate composer and inspirational performances. The triumphant release of Mission in autumn 2012 drew rave reviews and was followed up in September 2013 with Steffani’s Stabat Mater, alongside his greatest sacred works for chorus, orchestra and soloists, and a further disc of dances and overtures with the celebrated I Barrochisti conducted by Diego Fasolis. On the Stabat Mater, Bartoli leads an array of internationally celebrated singers including countertenor Franco Fagioli, the bass Salvo Vitale and the two young German tenors Daniel Behle and Julian Prégardien. The final album of the collection is Danze & Ouvertures’, contains 43 great tracks of enchanting early-baroque music.