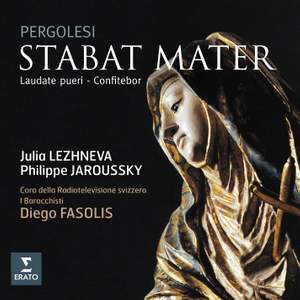 a dazzling display of how less can be more. Controlling his trademark exuberance, Jaroussky blends his voice perfectly with that of the pure-toned Julia Lezhneva...the choir and band respond... — BBC Music Magazine, January 2014, 5 out of 5 stars More…

Two voices of celestial beauty and expressive poignancy come together in this new recording of Pergolesi’s exquisite, but tragically charged Stabat Mater as Philippe Jaroussky is joined by the rising young soprano Julia Lezhneva.

The Stabat mater is written for solo soprano and solo alto accompanied by strings. The two singers on this new recording perfectly combine youthful vocal bloom with stylistic sensitivity and a capacity to convey the restrained tragedy of the work.

Philippe Jaroussky is, of course, established as one of the label's flagship artists. As his eminent colleague Cecilia Bartoli has said: ‘‘When I heard Philippe Jaroussky for the first time, I was struck by his musicality and sensibility ... There is a beauty in his phrasing and a delicacy, if not fragility in his soul, that touches the listener profoundly.’’

Julia Lezhneva established herself as a rising star when she won the prestigious Mirjam Helin singing competition in Helsinki in 2009. She has studied in both her native Russia and in the UK, and her distinguished mentors include tenor Dennis O’Neill and sopranos Ileana Cotrubas, Yvonne Kenny and, most notably, Dame Kiri Te Kanawa. Though still in her early twenties, Lezhneva has already shared a concert stage with Juan Diego Flórez, Angela Gheorghiu, Rolando Villazón, and Bryn Terfel. The New York Times has commented on the “almost childlike purity” of her timbre, praising its “angelic beauty”, while Cleveland’s Plain Dealer has described her voice as “an instrument of great distinction, a concentrated beam of pure sound. To borrow a Latin phrase ..., it's a voice one could attend ad infinitum.”

Diego Fasolis leads I Barocchisti in this programme of the Stabat Mater and two other choral works by Pergolesi, the Laudate pueri, which features a solo soprano, and the Confitebor tibi domine, which – like the Stabat mater – calls for two high-voiced soloists.

a dazzling display of how less can be more. Controlling his trademark exuberance, Jaroussky blends his voice perfectly with that of the pure-toned Julia Lezhneva...the choir and band respond vivaciously to the soloists and to the pulse set by Fasolis that propels the lines...this disc is magnificent.

Lezhneva's bright-eyed tone and sensitive shapeliness is an ideal counterfoil to Philippe Jaroussky's limpid sincerity. I Barocchisti's strings balance the sympathetic phrasing of rhetorical details with the need for the slow music to flourish in an atmosphere of unaffected simplicity.

Julia Lezhneva and Philippe Jaroussky are an ideal match. Their voices not only blend perfectly, sometimes you can hardly tell them apart. That lends their performance a sense of unity which I have seldom heard in this work before. ...one of the best recordings of the Stabat mater in the current catalogue.

the performances are electrifying, with superbly detailed playing from I Barocchisti, controlled yet joyous singing from the Coro della Radiotelevisione Svizzera, and soloists Julia Lezhneva and Philippe Jaroussky on terrific form...Fasolis sustains the rapt, devotional mood to perfection.