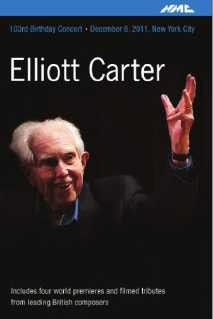 The performances by a cast of Carter devotees are flawless. — Gramophone Magazine, June 2014

This DVD features 4 world premieres (A Sunbeam’s Architecture, String Trio, Mnemosyné, Rigmarole) - two of which were specially written for this concert – and filmed tributes from leading British composers.

Enclosed is a 24-page booklet featuring a personal tribute of Elliott from Colin Matthews (see extract below) plus Fred Sherry's (Artistic Director) memories of the concert, extensive programme notes and many rare photographs from Carter archive.

The audio from the concert is also available to download in mp3 and FLAC formats.

Elliott and NMC by Colin Matthews ... I was as surprised as I was delighted to learn in the autumn of 2012 that Elliott Carter had asked if the recording of his 103rd birthday concert might be released on NMC. I had known Elliott since 1986, produced several recordings of his music (including the Concerto for Orchestra and the Clarinet and Violin Concertos) but had never thought that he might one day join the long list of NMC composers. It was clearly not an offer that we could think of turning down; but there was one problem that we had to resolve, because until now NMC has – with a few minor exceptions – exclusively recorded composers from the British Isles. A disc devoted to Carter was not the same as finding room for a small piece by Stravinsky. Elliott’s death in November 2012 – I had long believed that he must be immortal – meant that this recording would become a significant memorial to him; and it made it all the more important that if we were to release it, it should be done as soon as possible. It would be a DVD – thus setting it apart from the rest of the catalogue – and a tribute to a composer who was greatly loved and admired in the United Kingdom, as the recorded interviews presented here testify. And there was one more reason for it to be an appropriate release: Elliott Carter was the last surviving pupil of Gustav Holst, whose Foundation has supported the work of NMC since its inception.

The performances by a cast of Carter devotees are flawless.