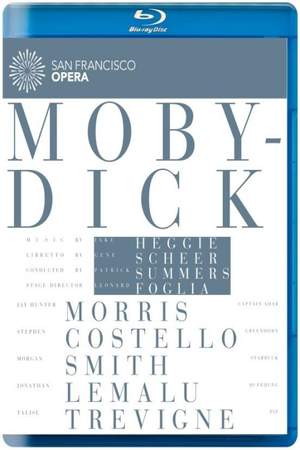 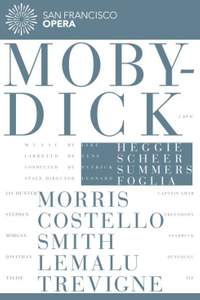 Along with Lucrezia Borgia this is the first EuroArts release in cooperation with the San Francisco Opera,internationally recognized as one of the top opera companies in the world

Composer Jake Heggie, in his "finest creation since Dead Man Walking," and librettist Gene Scheer adapt HermanMelville's meditation on man and the sea into "a vibrant, compelling piece of musical theater" (San FranciscoChronicle).

[Hunter Morris] seizes all the dramatic opportunities as Captain Ahab...Lemalu brings musical depth to Queequeg, and Stephen Costello's Greenhorn and Morgan Smith's Starbuck are strong. Beautifully filmed in an atmospheric set enlivened by high-tech nautical projections, this performances makes it easy to see what all the excitement has been about.

in this DVD, Moby Dick emerges as an opera that has everything, and takes its place alongside the esteemed oceanic operas Billy Budd and L'amour de loin. Thanks to computer imagery, the seascapes are indeed possible...Overall, the score's thematic development is the work of a master composer.

[Hunter Morris's] portrait of the demented and ultimately doomed Captain is full of subtlety and depth...Another powerful focal point is the Queequeg of bass Jonathan Lemalu, again not just powerfully sung but vividly characterized...Stephen Costello makes something surprisingly touching, vocally and dramatically, out of the smaller part of the novice Greenhorn.

Heggie seizes all the opportunities that are afforded him...[Hunter Morris's] voice rings out loud and clear with thrilling top notes. Stephen Costello as the contrasting tenor Greenhorn, more lyrical in tone, phrases his music with great skill and much beauty in his floated high notes...[Morgan Smith] produces a wealth of Verdian tone

if you eschew contemporary opera as overly dissonant, the tonalities of this work will assuage your fears...Foglia’s production for San Francisco is visually stunning and the use of projections means that it works well on screen...Hunter Morris is an Ahab who resists overplaying the part, his idiosyncratic Heldentenor cutting through the music.

Jay Hunter Morris on the role of Captain Ahab