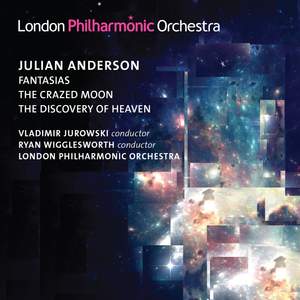 Julian Anderson: Fantasias, The Crazed Moon & The Discovery of Heaven

[The Discovery of Heaven] combines the spacious and the frenetic, timelessness and urgency, within an overall sense of luminosity. Fantasias (2009) is a magnificent showpiece for 21st-century... — BBC Music Magazine, January 2014, 5 out of 5 stars More…

An Echo from Heaven

Julian Anderson is one of the UK’s most exciting living composers. He has been described by The Times as ‘a composer to cherish’ and by the Evening Standard as ‘one of the finest composers of his generation’. His work Harmony opened the 2013 BBC Proms and his opera Thebans will be premiered at English National Opera in May 2014. This season he also starts a three-year post as Composer in Residence at Wigmore Hall.

Anderson has been the London Philharmonic Orchestra’s Composer in Residence since 2010. This is the first album of his works performed by the Orchestra, and includes one world premiere performance and two world premiere recordings.

This world premiere performance of The Discovery of Heaven won a 2012 Sky Arts Award in the Classical category.

This disc is conducted by Vladimir Jurowski, the LPO’s Principal Conductor; and young British conductor/composer Ryan Wigglesworth, who is rapidly making a name for himself on the international scene.

[The Discovery of Heaven] combines the spacious and the frenetic, timelessness and urgency, within an overall sense of luminosity. Fantasias (2009) is a magnificent showpiece for 21st-century orchestra, especially in this terrific performance...This is stunning music, played superbly and captured in good sound.

These three scores brilliantly performed by the LPO establish the composer’s emergence as a figure of international stature.

The players sounds as if they are enjoying what is, at the very least, a glittering workout...Neither effete nor vulgar, this might just be the new music you've been waiting for, its wow-factor surface fluency only part of the story. Strongly recommended.

[Fantasias] dates from Anderson’s residency with the Cleveland Orchestra and is a blisteringly inventive, often convulsively driven quasi-symphony...The Crazed Moon (1997) is a gravely beautiful 14-minute elegy for a friend who died young

it's the vivid recording of the third work here [Fantasias that makes the biggest impression...full of spectacular effects, textural sleights of hand and lightning-fast changes of direction, it's Anderson's most vivid, most approachable orchestral work to date.