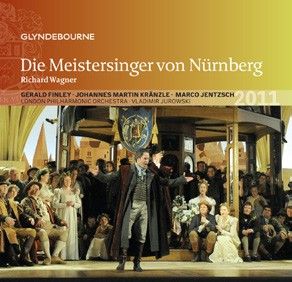 Right from the overture, Jurowski is imposing yet brisk...Though the voices are mostly smaller than Bayreuth's, they are full of character and lyrical beauty...And although one is aware of how... — BBC Music Magazine, January 2014, 5 out of 5 stars More…

Act 1 Scene 3a - Am stillen Herd in Winterszeit

The new Opera House at Glyndebourne, which opened in 1994, allowed Glyndebourne to entertain the possibility of staging a Wagner opera for the first time in their 60 year history.

Tristan und Isolde was first in 2003, followed by the staging of this production of Die Meistersinger in 2011. The largest production ever to appear on the Glyndebourne stage.

Glyndebourne’s founder Sir John Christie (1882-1962) had a life-long passion for Wagner and staged an amateur performance of Act III of Die Meistersinger (casting himself as Beckmesser) on June 3rd 1928 … well before the Festival was established in 1932.

On this recording, Gerald Finley makes his debut as Hans Sachs, portraying Sach’s character sensitively and sympathetically; his voice nothing short of glorious. Johannes Martin Kränzle as Beckmesser beautifully handles this insecure and second-rate talent with a first rate performance.

Marco Jentzsch as Walther is extremely impressive, his Heldentenor voice wonderfully warm yet assertive. Conducted by Vladimir Jurowski, he clearly understands the soul and humanity in this opera. With Jurowski at the helm, orchestral textures and colours are kept light and alive, resulting in a sound world somewhat different to most other available recordings. His reading remaining true to score and, most importantly, to the meaning of the opera.

This recording draws the listener in from the first note to the last, leaving one with music ringing in their ears for some time afterwards. 4 hours flies by!

Right from the overture, Jurowski is imposing yet brisk...Though the voices are mostly smaller than Bayreuth's, they are full of character and lyrical beauty...And although one is aware of how unusually baritonal Gerald Finley sounds, the impact of Sachs's words and his deeply emotional characterisation are to be treasured.

Finley is very fine throughout...I particularly liked Marco Jentzsch's Walther - it seems right that the prize song should have a touch of aggressive bravado about it...Gabler's Eva sounds attractively youthful