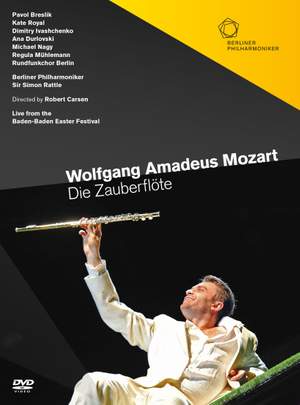 Think Eros and Thanatos; think the battle between life, love and death...You need quite a pool of literary reference for this production which, although it's as thoughtful and searching as Carsen's... — BBC Music Magazine, Christmas Issue 2013, 2 out of 5 stars More…

Pavol Breslik and Kate Royal are the young lovers put to the test in Robert Carsen’s production from Baden-Baden, with Ana Durlovski as the Queen of the Night, and Dimitry Ivashchenko as Sarastro.

“There are some pieces which are so brilliantly successful and so immediately popular that people tend to forget how extraordinary they are. But let’s not forget what a raging masterpiece Mozart’s Magic Flute is and how different it was from anything anybody had done before – even Mozart.” Sir Simon Rattle

The Financial Times spoke of a “top-drawer cast”: “Pavol Breslik is all you could wish for in a Tamino, Michael Nagy’s Papageno is charismatic and lithe, Kate Royal gives Pamina subtle complexity as well as grace.” Then there is all the magic of new beginnings that comes with this Easter Festival, which took place in Baden-Baden for the first time, opening a new chapter in the history of the Berliner Philharmoniker. And there is yet another first connected to this performance: the orchestra had never performed the opera live before. Only three studio recordings – under Sir Thomas Beecham in the 30s, in the 60s with Karl Böhm, Herbert von Karajan in the 80s – were previously released. This great recording tradition is now continued with this new DVD.

Think Eros and Thanatos; think the battle between life, love and death...You need quite a pool of literary reference for this production which, although it's as thoughtful and searching as Carsen's work often tends to be, is short on any sense of real enchantment or wonder.

[Rattle's] speeds are generally on the fast side but he allows the singers plenty of expressive leeway...Do give this a try if you’re after a thought-provoking new perspective on the Flute: the balance of dark and light is masterly, and it sounds and looks gorgeous!

Carsen’s staging and Michael Levine’s sets are stamped with strong contrasts ...though they still don’t find the most persuasive means of presenting the opera’s ingredients...Rattle’s speeds are occasionally too fast, but his phrasings and details are bright and bouncy...Solid performances at the top keep the lyric drama alive.