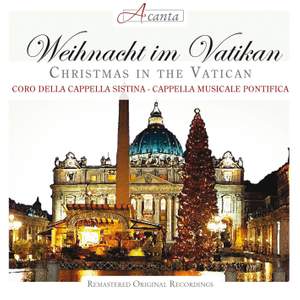 Christmas in the Vatican

These rare recordings of music from the Vatican were made in 1973 and feature the Sistine Chapel Choirs and the Cappella Musicale Pontifica performing music by composers including Palestrina, J.S. Bach, and Corelli. The musical director is Domenico Bartolucci.

John XXIII took steps at the start of his Papacy to greatly improve the training of the boys’ voices in the Sistine Chapel choir. The recordings collected on this CD document the result of this reform and show the choir under the direction of conductor-composer Domenico Bartolucci at a peak in its performance. The choir’s duties include attendance at Papal masses and thus focus on the performance of liturgical music. Accordingly, the works of Palestrina are central to the programme of this unique disc.